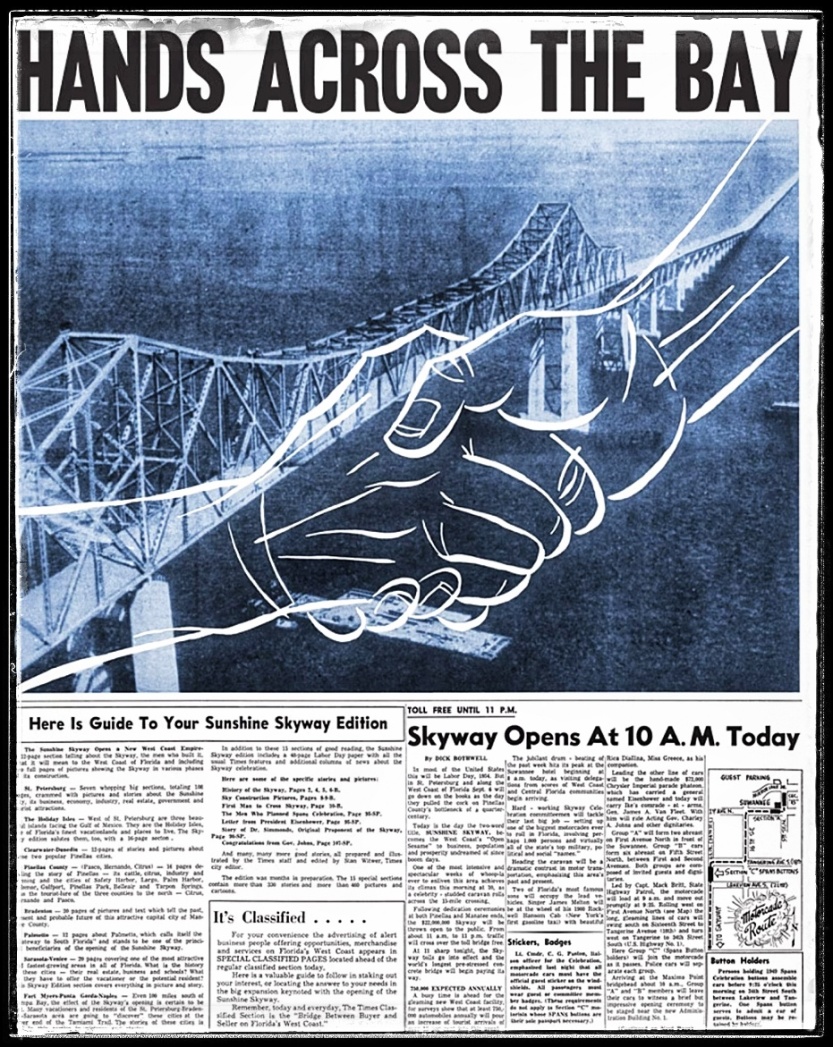 WHEN I WAS a kid, my family would make frequently drive from our home in Pinellas County, Florida to Fort Myers to visit my grandmother & Great Aunt. The trip down was pretty quick, only about 90 minutes to 2 hours, so they aren’t very memorable. What does stands out in my mind is having to cross the Sunshine Skyway Bridge to get both there & home…Probably because I’m terrified of heights.

MANY YEARS LATER, I’d come to realize that the bridge that has been traveled for years & has been an iconic landmark for us Floridians isn’t actually the OG. The original Skyway Bridge didn’t come into existence until the early 1950’s & would change the way Floridians traveled from South St. Pete to Bradenton. Unfortunately, it would also become the centerpiece of one of Florida’s most memorable & tragic events.

FOR MANY YEARS, the options for traveling from St. Pete to Bradenton (and further south) & vise versa were limited. People could hop on a ferry, ran exclusively by Bee Line Ferry & would only allow for about 2,000 cars to be transported each day OR you could hop on U.S. 41 & take an almost 2 hour trip, over the Gandy Bridge & through Hillsborough County. I can attest to the latter being a total pain in the ass, as even today that’s the only option for drivers whenever the bridge is shut down.

AFTER SEVERAL YEARS of discussions, officials finally decided that the best solution would be a bridge that would run over Tampa Bay into Bradenton. On October 19th,1950, construction began on what would be the original Skyway.

CONSTRUCTION WOULD END just 4 short years after it began. The result was a $22 million dollar beam bridge with a central truss bridge built directly to the west of  structure. 11 of its 15 mile span was suspended above the water & at its peak stood 150 feet above the ocean. At the time, it was known as the tallest bridge in the United States.

THE ADDITION OF the new bridge was all the buzz amongst officials & residents alike & big plans were made to celebrate its opening.  Officials even held a contest to name the bridge, in which locals sent in suggestions such as “The Bridge To Heaven”, etc.. The winner, sent in by Ms. Virginia Seymore of Indian Rocks Beach, was “The Sunshine Skyway”, the name that we all know today.

ON SEPTEMBER 6th, 1954, the bridge officially opened to thousands of eager travelers. Celebrations were held on both the Pinellas & Manatee sides of the bridge & many food & merchandise vendors lined each side along with the press. In honor of the grand opening, the St. Pete Times put out a special, 5 pound collector’s edition of the newspaper. The $1.75 toll was suspended for the occasion, so the only thing left to do was to let the cars begin to cross.

AT 9 AM SHARP the motorcade began the 1st trip south over the brand new Skyway Bridge. Of course the 1st to cross were local & state politicians, followed by the area’s most prominent citizens. After all of the pomp & circumstance, the average residents were finally allowed to cross. The day brought hours of waiting due to a massive traffic jam caused by so many attempting to drive across the 2 lane bridge. It was estimated that close to 5,000 cars crossed the bridge that 1st day.

IN ALL OF the excitement, I’m sure that nobody ever anticipated that there was a ticking timer on the bridge & in just 26 short years, the beloved old Skyway Bridge would be at the center of a major tragedy…